WMS provides a lot of ways to interpolate data from one module to another. Since geometric objects may not line up exactly, values often need to be interpolated from one object to another. Common interpolation methods involve interpolating DEM and TIN elevation to a grid or mesh. However, a lesser known function is interpolating data to the feature objects on a map coverage. 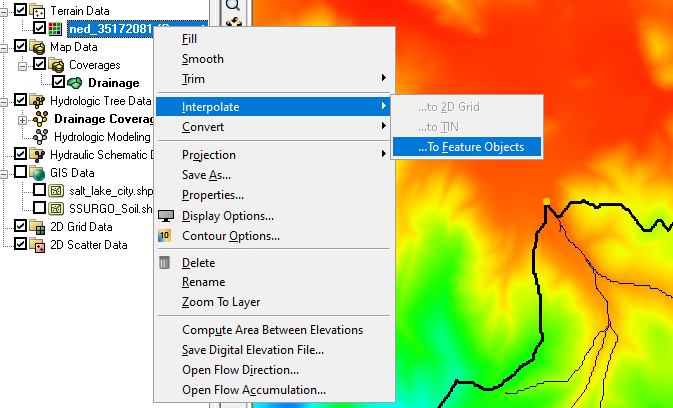 Typically, interpolated to feature objects is done when you have manually added features objects without designating elevation during the digitization process. It can also be used in cases where the elevation values appear inaccurate and need to be changed to match a new set of elevation values. It may also be useful after importing map data that is missing elevation data.

Try out interpolating to feature objects in WMS today!

In SMS, after spending time creating the perfect arc, polygon, or series of points on a map coverage, you may find that you need that feature object added to other coverages. Recreating the same feature object manually could be too time consuming. Fortunately, with the release of SMS 13.1 beta, there is now the Copy to Coverage command. 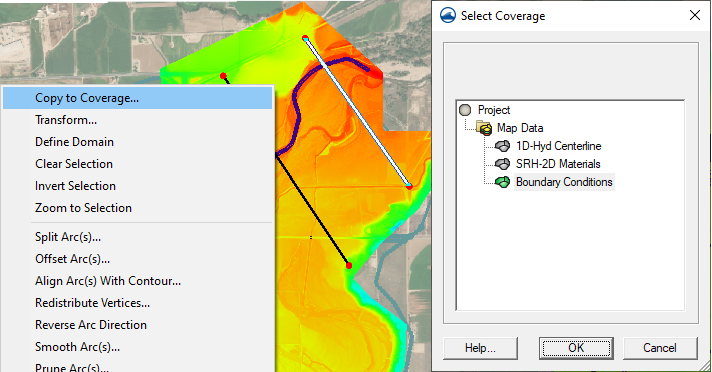 When the feature object has been copied, attributes (boundary condition types, materials values, etc.) assigned to the object on the original coverage will need to be reassigned if the new coverage is of the same coverage type. Currently, feature object attributes cannot be preserved when copying to a coverage of the same type.

The Copy to Coverage command is most useful when you have a coverage with a lot of feature objects, such as those imported from a shapefile, but you are only needing one or two of those feature objects copied to a new coverage. For example, have a mesh generator coverage with arcs that would work well for boundary conditions, you could select and copy just the arcs that you intend you use as boundary condition arcs to a boundary conditions coverage. This is a faster process than duplicating the entire coverage, changing the coverage type, and deleting unnecessary objects.

Try out the Copy to Coverage command in SMS 13.1 beta today!

When using GMS to create a single simulation batch file, do the following:

Among the simulation files, you will have a *.bat file. To use this file to run multiple MODFLOW simulations, do the following:

Once the simulations have run to completion, you can load the results into GMS by creating a GMS MODFLOW results file (or MFR file) for each simulation. The file name of the MFR file should match the MODFLOW name file.The format for an MFR file can be found by examining an existing GMS MODFLOW solution set.

It is recommended that you use the GMS model check for each simulation and resolve any issues found before including the simulation in the batch run. However, if the simulation does include a problem, it will not stop the following simulations from running. In this way, MODFLOW can be run for multiple GMS projects.