A beta version of GMS 10.3, the next version of GMS, has been posted on our downloads page. This release includes a new model interface (MT3D-USGS), a much improved model interface (mod-PATH3DU), and lots of other enhancements, many of which were specifically requested by users. The full list of What's New can be found on the wiki, but here's a brief summary of some of the more noticeable changes. 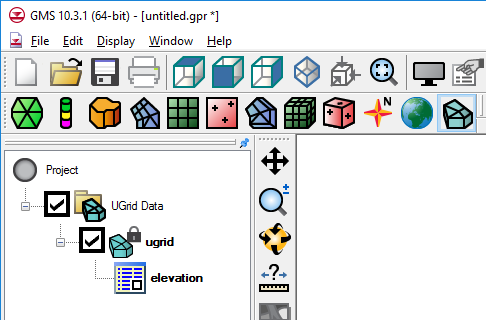 One of the most immediately noticeable changes will be the new icons. The icons in GMS looked very small on some newer, higher resolution displays, so we've added larger versions of all the icons and GMS automatically switches to use the larger icons when it is run on a hi-res device. This effort involved an overhaul of almost all of our icons and some of them look noticeably different.

This is a new model from the USGS which includes, among other things, transport calculations through the unsaturated-zone. GMS 10.3 includes an interface to MT3D-USGS and the interface is similar to those of the other flavors of MT3DMS.

The mod-PATH3DU interface has been improved and taken out of beta. Support for mod-PATH3DU version 1.1.0 including the new Waterloo method was added, as well as support for specifying DefaultIFACE, a model checker and a model wrapper, and the ability to create starting locations using a UGrid. More export options were also added including exporting pathlines to a shapefile.

We've added the ability to create a CLN (connected linear network) from a shapefile. The CLN process is part of MODFLOW-USG but up until now it has not been easy to create this data in GMS. Using a 2D or 3D shapefile, GMS can automatically intersect the shapefile with the grid and create the CLN data. A new tutorial was created to demonstrate how this is done.

Prior to version 10.3, GMS did not calculate the flow between zones or between selected cells for MODFLOW-USG models as it did with other versions of MODFLOW. This has now been implemented for MODFLOW-USG.

The DISU package data was being recalculated every time the model was saved, even if nothing had changed. This data can take a long time to calculate and save, so now GMS 10.3 will only recalculate the data if it needs to due to a change. For models that were created outside of GMS, the DISU data is never recalculated because the unstructured grids are often not suitable for these types of calculations (ie. vertices are not shared). The result is that these models are better supported in GMS because GMS no longer overwrites the correct DISU data with garbage data.

Each UGrid can now have it's own display options. All of the UGrids are now listed in the Display Options dialog. Default UGrid display options are also available, which new UGrids inherit from. Options for one UGrid can be copied to other UGrids.

The ability to split a UGrid layer has been added, and is similar to this feature for 3D Grids.

As mentioned in a previous blog post, a new feature called "Notes" has been added which allows you to add notes to almost any object, including the project itself. This is meant to help document the modeling process as the model is being built. GMS can also automatically create notes about how new items were created. Notes include a timestamp indicating when the note was created.

Many other enhancements are included in GMS 10.3, including four new tutorials and lots of user requests. Some things are still not fully tested or complete, hence the "beta" status, but you are welcome to download GMS 10.3 and give it a try. Your feedback is welcome at support@aquaveo.com.

GMS 10.3 will include preliminary support for MT3D-USGS, a new transport model from the USGS that is based on MT3DMS and which allows for transport through the unsaturated zone, among other things. Here's a simple animation made in GMS showing a contaminant dropping through the unsaturated zone, hitting an aquitard, and spilling over the edges. This animation is based on a new tutorial that will be included with GMS 10.3 on how to use MT3D-USGS in GMS.

It's been awhile since we posted any sprint reports, but that doesn't mean we've been enjoying a long vacation. GMS 10.3 is getting close to being done and the list of new features has been put on the wiki. There are a number of MODFLOW improvements, support for MT3D-USGS, major improvements to mod-PATH3DU (particle tracking for unstructured grids) and lots of other things including many user requests.

One user requested feature that will be in GMS 10.3 is the ability to add notes in various places in GMS. Notes can be added to objects like UGrids and coverages or to the project itself to help model developers remember where things came from or why they did things the way they did. GMS adds some notes automatically, like when an object is created from another object, like Map -> UGrid. All the notes can be shown, or just the user-created notes, or just the GMS-created notes. Here is an example of what it will look like. 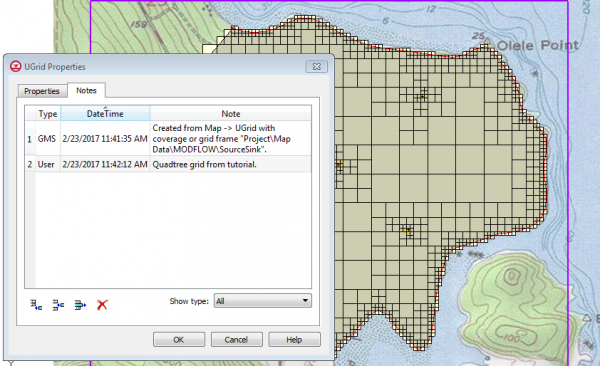