Have you ever wondered what the difference between projection and reprojection is? Have you ever needed to convert a projection from one type to another in GMS, SMS, or WMS (collectively known as XMS)? The use of projections in WMS can be confusing, so the following should provide further clarification.

Projections can be associated with individual data objects, either in the object data file itself or in an associated *.prj file. If XMS cannot find a projection, the object will be left as "no projection," or, when new objects are created, XMS will assign the display projection to it. You can specify an object's projection by right-clicking on it and selecting Projection. Note that this projection must be the same as the original projection of the data; specifying an incorrect projection will result in data issues.

Reprojecting on the Fly

"Reprojecting on the Fly" occurs when datasets or objects from multiple projections are loaded into a project, where the x and y values would not otherwise overlap (i.e., the data would be displayed in two or more distinct locations). The different projections for these data will be "reprojected on the fly" to match the display projection such that the data objects will line up. Note that this does not change any *.prj files or the projections that are set for each object; it is an automatic function internal to XMS used for display purposes.

If you need to convert from one projection to another, this can be done by right-clicking on it and choosing Reproject. To use this command, the data must first have the correct projection specified. After choosing Reproject, the command will prompt the user to select a new projection, the data will be converted to the selected projection. If a *.prj file is associated with the object (such as a TIFF), reprojecting the object will change the *.prj file. Reprojection on the fly is usually sufficient for most applications. Please note that there are some limitations for reprojecting. 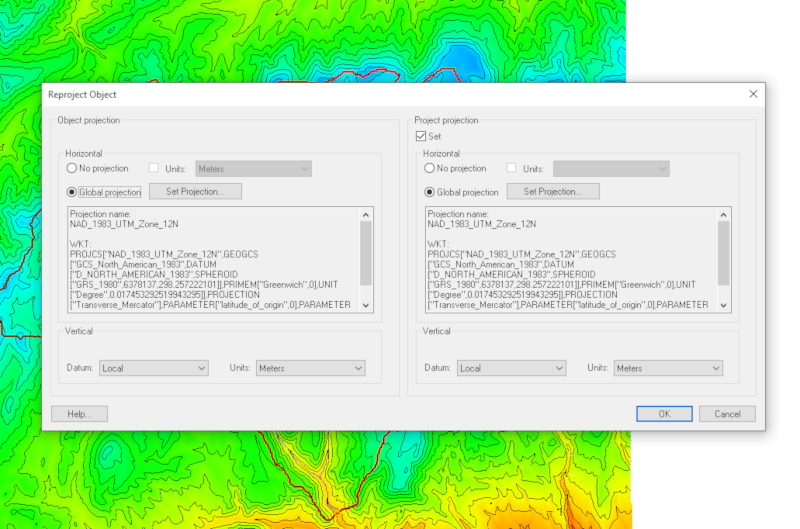 Now that you see the differences between projection vs. reproject try them out in XMS today!